The partnership with the world-renowned Russian rolling stock manufacturer collected, in the last two years, two Red Dot, one Good Design and one iF award 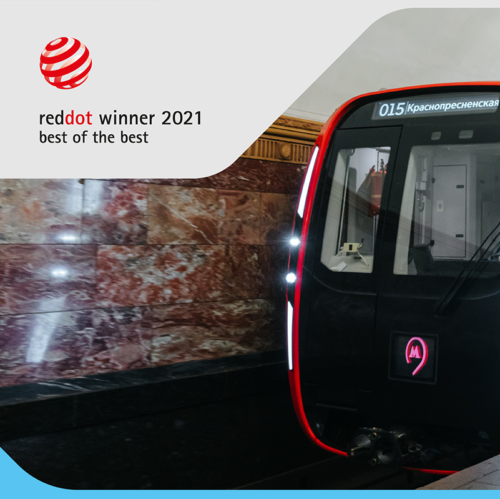 2020 and 2021 saw TMH and Italdesign winning many of the most prestigious and renowned design awards internationally. The partnership between the Russian rolling stock manufacturer and the Italian Design House and Service Company brought to life two main projects: the all new Moscow metro and a DNA design for a new train fleet.

Both have been internationally recognized and awarded by the most important design organization such as Red Dot Design Award, iF Award, Good Design.

The TMH Deina metro train has been successful in the Red Dot Award: Product Design 2021. The international jury has awarded Deina the Red Dot: Best of the Best in the “Trains and Planes” category. The highest distinction in the competition is synonymous with ground-breaking design and is awarded only to the best products in a category.

The DNA design project for TMH’s new train fleet won the iF Design Award 2021 for its “Design Excellence” within the “Vehicle” category, after being awarded the Good Design and Red Dot in 2020. The TMH Brand DNA is a unique identity that will be recognizable not only in Russia, but throughout the world.

The same project was awarded, last January, with the 2020 Good Design Award,

TMH was the first Russian transport engineering company to create a brand-DNA. The unique design language was developed in cooperation with the leading European design studio.

“This is an incredible victory for the large international team of TMH – designers, engineers, employees of our production sites, who not only came up with an amazing train aesthetics, but also brought it to serial life. Today Deina runs on metro lines of one of the most beautiful subways in the world – in Moscow,” said Evgeniy Maslov, TMH Chief Designer. “It is a major achievement for TMH as it brings us ever closer to gaining international recognition which is our main goal”.

“Our recent cooperation with TMH is a success and I am really glad and thankful to all the people at TMH for making it possible. We had the chance to work on two big projects, such as the DNA design for a new fleet, and the new design for the Moscow Metro and I really want to thank Kirill Valerevich Lipa, Kristina Dubinina, Evgeniy Maslov and their team.

I always say that teamwork makes a great work and all these international design awards confirm that. Without the experience, skills, commitment and passion everyone involved in these projects have shown, these achievements wouldn’t be possible. So, again, I want to express my deepest gratitude to TMH and its complete Team for their trust and to the team here”, Italdesign CEO, Joerg Astalosch said.